A network that grows proves the need for its existence

2016’s 10year celebrations of the young professionals for agricultural development’s network (YPARD) are generating a series of festivities online and on the ground, all around the world and throughout the year. The third Global Conference for Agricultural Research for Development (GCARD3) offered the floor for the YPARD’s global face-to-face anniversary.

A hundred of people – young and senior – from every region of the world, gathered around key testimonial speeches that reflected on the impact the network has achieved. We listened to some young professionals who talked about what YPARD has done for them. Some key partners also shared what they see as the added value of YPARD.

For YPARD Team, it was a chance to celebrate its members, representatives, partners and to provide a big thank you to everyone who has supported YPARD over the last decade.

One of the founders of YPARD, Kristina Roing de Nowina, emphasized how the network started with a nutshell of young people and ideas stuck on a wall, to become the established network it is Today. With very little money and tremendous work of committed young people, YPARD’s difference is in its members, who believe in what they do, who work hard together, make a difference and eventually change the world. What strikes Kristina is how YPARD manages to grow and stick to its core objectives while evolving and adapting to a changing environment to keep its relevance and strengthen its support to the youth in agriculture.

Several country representatives and active members, from Africa, Asia, Latin America and Europe shared how YPARD made a difference in their life and their fellows’. Mzekiwa Matsimbe, YPARD Malawi representative, talked about how, since her participation in the GCARD2 social media training, she has become the communications focal point at her work.

But also, she expressed that, since she became a YPARD member, she has her fellow members at heart. While her first approach to YPARD was towards finding opportunities for herself and her career, she grew an understanding and an interest in leading stronger support to young people. She runs a program that opens up opportunities to young students in Malawi. ‘Not only are we looking for external support to the youth from partners, but we take action and create opportunities of our own, for our fellows.’ She said.

Iana Perevoshchikova, YPARD Representative for Russia, also confessed: Young people feel more comfortable to express themselves when they stand as a group. They are too shy to speak up when they feel that they are pursuing a cause alone. YPARD benefits the youth through networking, capacity development, and giving a voice to the youth. At their turn, young people are the best in giving a positive image of agriculture.

Among YPARD partners, Didier Pilot, from Agrinatura took the floor. “I am impressed!” He said “I doubt that any of the YPARD founders would have guessed that 10 years after, YPARD would be here with so many people celebrating the 10years of YPARD”. It brings a lot, to us, universities, to work with young people. You offer a set of competences and skills that are needed. YPARDians are able to give feedback on educational curricula, as young professionals: with their own experience of the job market on the skills they are missing. “Nobody else can do that”.

It is sometimes a challenge to show the concrete impact of YPARD as a network. Still, “small is big; small steps have big impact.” Jim Cano, YPARD Philippines representative, claimed. What is certain is that YPARD is a growing community receiving increasing feedback on how positively it impacted its members and more and more demand for collaboration from partners. If Peter Casier is right when asserting that “the only way of measuring success as a human being is by looking at how many and how much you touch other people’s life positively’, then, YPARD is on good way. Yet, as a growing network, we also need growing support to maintain it and to show our impact better.

When two YPARD Friends decide to compose a song, the South African way, for #YPARD10years celebrations, here is what it gives: YPARD 10year celebrations' song. 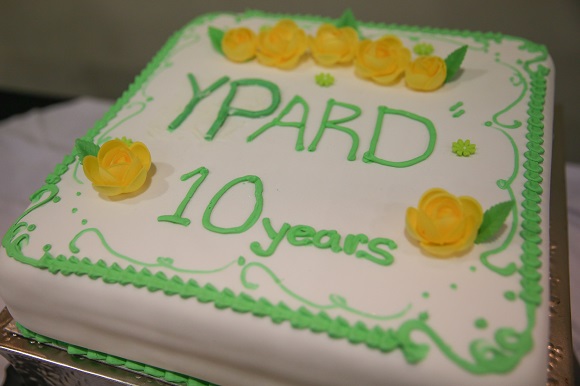 If the young don't farm, who will feed the world Tomorrow?

Speaking for Youth-- I Would Love to Be the Voice

From Microscopic Views to Global Visions

Innovation, the key to attract Young Professionals to Agribusiness