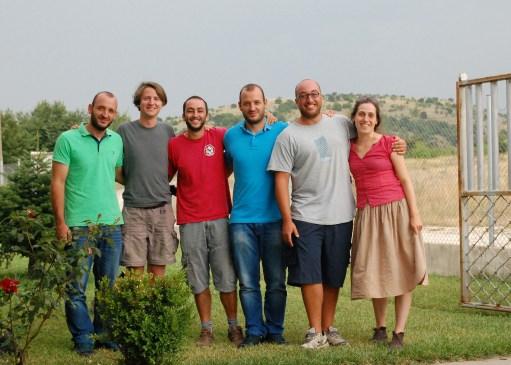 The family of the three brothers Christos Belides (32), Miltiades Belides (30) and Theodoros Belides (20) has a long history of wine producing. Their grandfather was winegrower in Constantinople and in 1922 he took some of his wine varieties with him to Greece.

Nowadays the winery is located near the city Kozani, in the north of Greece. The three brothers are running the organic winery together with their father Apostolos Belides who worked much of his professional life as an electrical engineer.

Belias wines cultivates 10 hectares of vines and operates a new winery with modern equipment. The brothers could make use of support from the funds of the European Union. However, Miltiades advises young farmers not to solely build their business on this support. In his opinion there is so much bureaucracy in Greece that  even though it might work  it will take so much time to fill all the papers and finally receive the repayments of your investments.

Tsipouro and Ouzo (anis flavored Tsispouro) are the liquors distilled from the leftovers after the grapes are pressed. Christos starts to smile when you ask him about the distillation process: For about one month a year the distillation kettle is working 24 hours a day. After we have finished the production of our Tsipouro, other people will come to our winery to distill their own Tsipouro. This is really like a long celebration with lots of music, fun and of course Tsipouro.

Source: Future Farmers in the Spotlight

More posts from author
Tuesday, 27 May 2014 Old farmers never realize how much energy a young farmer can bring to the farm!
Thursday, 22 May 2014 Belias Brothers  Young family farmers producing wine in Greece
Thursday, 06 June 2013 Future Farmers in the Spotlight  Success stories of young farmers from all over Europe!

Our 7 cents for a successful funding proposal to attend conferences

What is the Mediterranean area's future?

FSN Forum in West Africa - How would you make agriculture more attractive for the youth?

Rural youth in Brazil: An interconnected network of ideas