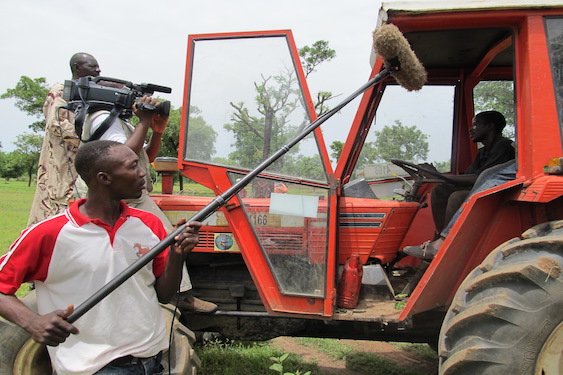 Over the past years, many of us – individuals and organisations, have been advocating for the active engagement of African youth in agriculture. Indeed, with an ageing farming population and the high unemployment rate among youth, agriculture, being the main economic sector of most countries in Africa, could potentially provide employment opportunities to young people. However, in order to get youth involved in the sector, the image of agriculture has to be made more attractive, and also success stories of young people involved along the agricultural value chain need to be further valorised and promoted. We have seen youth champions and their success stories being documented and shared in the form of written pieces such as reports, publications and articles. But what new and innovative can we bring to the table to better valorise successful youth ventures in agriculture?

As goes the saying “seeing is believing”, there is nothing more convincing than actually seeing youth successfully engaged in agriculture for others to get involved or encouraged to take the first steps. In this line of thought, the project “Agribusiness TV” was conceptualised, focusing on youth agricultural entrepreneurship initiatives in Africa. Initiated by MEDIAPROD, an agency specialised in communication for agricultural and rural development, Agribusiness TV is a web television (also known as web TV) aiming at using video as a tool to promote youth successes in agribusiness. From youth interviews to testimonials and actions on the ground, Agribusiness TV will put special emphasis on: how did the youths being portrayed achieve success in agribusiness? What have been those “secret ingredients” which made their business idea work? What have been the challenges faced and how they managed to overcome them?

How it works and what to expect?

Being the first web TV focusing specifically on youth in agricultural entrepreneurship in Africa, Agribusiness TV will be launched as a web and mobile application. In the videos, youth portrayed will be young women and men aged below 40 years, who are engaged in agribusiness in any segment of the agricultural value chain (production, input supply, research, extension, value-addition, transport, marketing, etc.). In terms of audience, all youth interested or involved in agribusiness are primarily targeted. Other targeted audience are individuals and organisations supporting youth in agricultural entrepreneurship. As a start, the project will cover four countries in West and Central Africa, namely Benin, Burkina Faso, Cameroon and Cote D’Ivoire.

The team and expected launch

The team behind Agribusiness TV is a group of young professionals in information and communication, who have worked in the agricultural sector for many years and have a good understanding of the question of youth and agriculture in Africa.  The production team, comprised of experienced local video journalists in the four countries covered will capture videos on the ground, which will then be finalised, published and disseminated by the project management team. An inception workshop is planned to take place from 7-11 February 2016 in Ouagadougou, Burkina Faso, whereby the whole team of Agribusiness TV will be meeting to fine-tune and finalise their work plan for the first phase of the project. Following this workshop, it is expected that the web TV will be officially launched by April 2016. With the launch, the first video reports on successful young agripreneurs will be unveiled. From there, six original video reports will be posted on Agribusiness TV every month.

Want to be featured? Get in touch!

Do you know (or you are) a young agricultural entrepreneur based in Benin, Burkina Faso, Cameroon or Cote D’Ivoire and want to be featured on Agribusiness TV? You can get in touch with the team by sending an email to This email address is being protected from spambots. You need JavaScript enabled to view it., giving a brief description on the young entrepreneur and his/her agribusiness activities. Until the launch, stay tuned and follow the updates on Agribusiness TV on Twitter (@AgribusinessTV)!

Agribusiness TV is an initiative of MEDIAPROD, supported by the Technical Centre for Agricultural and Rural Cooperation (CTA) through its Agriculture, Rural Development and Youth in the Information Society (ARDYIS) Project.