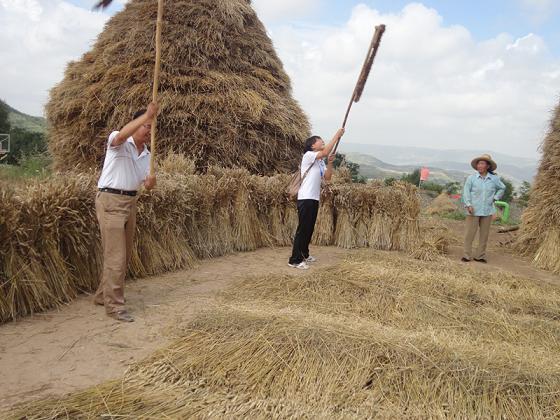 It is generally believed that field survey is a vital and basic way to conduct research and for the preparation of polices. We (International Division of Agricultural Information Institute, CAAS) did several long time and large geographical span field surveys in the past years.

The study Improving nutrition, food safety and food security for Chinas most vulnerable women and children was conducted in 2010-2012 by the United Nations Joint Programme and CAAS (Chinese Academy of Agricultural Sciences) in partnership with the Chinese government. The key objective is to improve evidence of household food security through baseline and resurvey studies in six pilot counties in rural China. The results will be used to guide policy and programmes aimed at reducing household food insecurity in the most vulnerable population in China.

The study was used as an example in this blog for sharing field survey experiences.

Villages in developing countries have many things in common. It is expected that our projects' experiences could be shared with other project teams, making the implementation process more rigorous thus providing better outcomes.

In order to compare the situation of poor Chinese villages to those of other countries, the project team adopted the WFP questionnaire framework with questions reflecting the characteristics of rural China also included.

Before the final decision on the questionnaire design was reached, five consultative meetings were conducted, where experts in food safety, food security, poverty-relief and development from WFP, IFPRI, Leading Group Office of poverty Alleviation and Development of the State Council in China and Renmin University of China participated and provided the project team with valuable suggestions. The most appropriate questionnaire version was then adopted.

The first stage is the selection of villages using the probability proportional to size (PPS) method to create a self-weighted sample in which larger population clusters (villages) have a greater chance of selection, proportional to their size.

Following the selection of the villages, 12 households within the village were selected using simple random selection. In each county, 228 households were interviewed from 19 villages totaling 1,368 households across the six counties.

The local government authorities were consulted in advance in order to obtain their support during the field work. The research areas were poverty-stricken areas where the natural environment is very harsh, so all kinds of medicines were essential.

Systematic training is essential to any project. On July 25th 2012, the project teams conducted one day training to enumerators at the Yunnan Agricultural University and Northwest Agriculture and Forestry University.

Due to the difference in the route design and time arrangement, we completed 6 to 11 villages daily. Based on the amount of daily tasks, we were divided into different teams. Each team had 3 to 6 people. Closer villages were assigned fewer enumerators as they spent less time on the road allowing them to conduct more questionnaires. In this way, all the teams could finish work in a time of relative equilibrium.

Focused interview with the village cadres helped the team to understand the villages main characteristics, including the migrant workers, diseases or the development of special industries.

After focused interview, one of the team members filled the Village-level questionnaire which included detailed information of villages, such as the situation of infrastructures, the progress of poverty alleviation and the medical services.

There were some tips followed during the process of filling in the household questionnaire. These tips are: patience, politeness, and being modest. One village cadre stayed with each enumerator in case of unexpected situations.

At the end of the entire investigation, a group photo with the village cadres and some other villagers was taken to show sincere gratitude and express heartfelt thanks for their enthusiasm and cooperation.

Lessons Learned from these three stages:

Firstly, the traditions and habits of each place should be known. For example, some ethnic minority didnt eat pork, so the team members did not mention pig consumption even it was in the questionnaire.

Whats more, the members of our team investigated the local food price before field researches to avoid large deviation.

At last, it is very crucial to contact the village heads some days before heading to the respective villages so that an appropriate visiting day and time is planned and agreed in advance.

My partners will post blogs about the next 4 stages (Questionnaire Check, Data Entry & Clean, Expert Consultation and Achievements Dissemination Stage) successively. All questions, suggestions and ideas are welcome!