Food loss and waste: a threat to sustainability 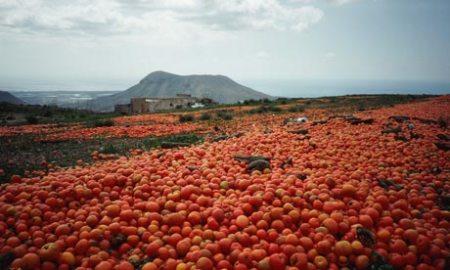 Almost 1.2 billion people are going hungry in the world; a third of those are in Africa and sadly a lot of those are actually farmers themselves. Those were the portentous words of Sean de Cleene, a senior vice president of Yara International (a leading fertilizer company based in Norway with businesses in Africa) and member of the World Economic Forums New Vision for Agriculture  in an interview granted to Spore (an agricultural magazine for ACP countries).

Though other estimates differ, some putting the number at a more conservative range of 870  900 million people, still the general consensus is that a substantial part of the global population is suffering from hunger and a disproportionate part of this is in the developing world  to which Africa belongs. Ironically, an estimated 1.5 billion people are either overweight, obese or suffer from over-nutrition globally.

Despite this humbling fact, i.e. while a large number of people go without food daily, one-third of food produced globally for human consumption is lost or wasted; and the quantity of food thrown away in developed countries is almost equivalent to the total amount produced by sub-Saharan Africa. This wastage of about 1.3 trillion tonnes of food is valued at nearly one trillion US dollars. More so, according to FAO, just a quarter of the food being currently lost or wasted is enough to feed up to 900 million (which is the number of those going hungry according to some estimates).

In sub-Saharan Africa, annual post-harvest losses of grain crops alone was estimated at four billion US dollars, a value that is roughly the same as that of the annual cereals imports in the region and could meet the minimum food requirements of at least 48 million people. Some of the causes of this staggering loss and waste are inevitable; although many of it are avoidable and will only demand decisive action and reorientation in the value chain.

For instance, while it may be hard to eradicate losses due to natural causes like pests, extreme weather conditions, senescence etc; losses that accrue at the processing and other post-harvest stages can be minimized by making affordable post-harvest technologies available to smallholder farmers, by creating a better network of feeder roads for distribution, and strengthening the value chain especially in African countries.

Conversely, factors like rejection of produce by chain-stores and retailers due to cosmetic imperfections, growing affluence and an increasing throwaway mindset of consumers, unplanned purchase, impulsive and bargain buying, also lead to massive food waste but are harder to deal with because they are products of perception and our increasing culture of consumerism.

The implication of this is that, not only is a great amount edible food wasted or discarded in a world where many are dying of hunger, but a lot of natural resources e.g. water and nutrients, used in the production of this food are also wasted. Some of these resources are non-renewable, that is once exploited they are gone forever; therefore using them to produce food that will never be consumed is both wasteful and environmentally unsustainable. In addition, rotting food generates methane, which, molecule-for-molecule is twenty times more potent than carbon dioxide as a greenhouse gas, and a contributor to climate change.

Consequently, this inefficient use of food resources, which often leads to the need to increase agricultural output, encourages a host of activities like opening up of new lands, deforestation, bush burning, increased fertilizer and pesticide application, and other activities that increases agricultures already high contribution to climate change and global warming. This is both economically inefficient (unacceptable) and ecologically unsustainable (damaging).

Thus, while the problem of hunger persists in the world, the solution to increasing access to food lies not solely in increasing agricultural production  as the current production level is sufficient to feed the world  but in making sure that wastage is reduced as much as possible and improving distribution of the available food resources. This will take care of our present problem without creating future ones.

PS: In some countries, some non-governmental organizations are actively involved in creative distribution (or redistribution) of food resources that would have been wasted or thrown away. Examples are organizations like Fares-Share and Feeding-the-5000 in UK which work to divert surplus food from the supply chain, to ensure it reaches people in need; and The Last Minute Market (food recovery programme) in Italy which links shops and restaurants with unsold food with charities and people in need.

Source: Blogpost by Bunmi Ajilore, one of the AASW social reporters on the FARA-AASW Blog.
Picture courtesy The Guardian