Mapping the Future Scenarios of Land Degradation and Restoration 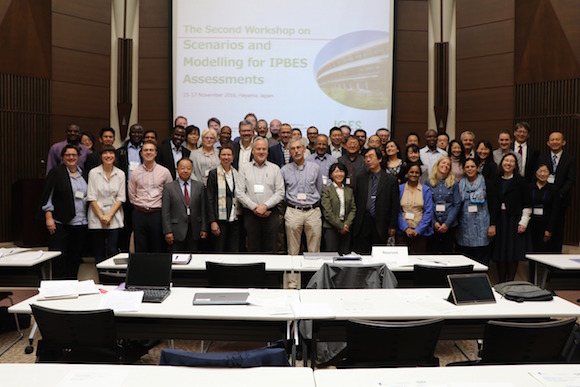 Agriculture and food production are highly dependent on climatic conditions and a host of ecosystem services, without which it will be impossible to feed the growing population of the world.

This recognition of the inter-dependent relationship between agriculture and climate – and some of its key drivers/effects such as loss of biodiversity and land degradation among others – is one of the main leverages the agricultural  development community, and others interested in food security, have been exploring to mainstream agriculture within the global climate change negotiations and agreements.

Thus, when I got an invitation to contribute to a food and agriculture section of one of the chapters (on scenarios of land degradation and restoration on thematic areas including food production/availability and agriculture) of a scenarios report, titled “Land Degradation and Restoration Assessment” being developed by a team put together by the Intergovernmental Science-Policy Platform on Biodiversity and Ecosystem Services (IPBES), I was both enthusiastic to join the team and also impressed to see agriculture and food production being taken as an essential theme in such an important scenarios report.

The report, which is still at the second draft stage and is expected to be finalised next year, intends to focus on the widespread issues around land degradation across different regions, biomes and ecosystems of the world. It will do so with an assessment of a range of human-modified systems and with a focus on drylands, agricultural and agroforestry systems, forests and aquatic systems among others.

Recently, a second Workshop on Scenarios and Modelling for IPBES was convened in Hayama, Japan by the Institute for Global Environmental Services (IGES) in collaboration with the IPBES Technical Support Unit, the Netherlands Environmental Assessment Agency (PBL) and the Japan Biodiversity Fund (JBF), from the 14th – 17th  November, 2016.

The workshop brought together lead and contributing authors, and young fellows of the chapters 5 and 7 of the report to discuss the main findings drawn from the first draft, “identify similarities and differences by using a jointly developed analytical framework”, share experiences, and identify common grounds and consistency among these chapters.

The diversity was perceptible. Participants, who are also the authors and reviewers of the chapter, came from different regions of the world along which the regional assessments were subdivided. Women and young professionals had a notable representation in the team. I had been invited in my capacity as a contributing author and as the YPARD Foresight focal point.

In addition, the discussion sessions on policy relevance of the chapters at local, regional and global levels were enriching. Almost everyone acknowledged that, considering the political shocks (or mildly put surprises) of the year so far, there is a need for experts to simplify their technical phrasings and communicate policy-relevant assessments in a, perhaps “Trump-like”, language that resonates with the general public, especially voters who appear to feel increasingly disconnected from the views of experts.

At the end of the three days of intense deliberations and exchanges, I came away with an improved view of the overarching relevance of the report at this auspicious time, a better understanding of the importance of seeking public acceptance through simplified communication for scientific and development assessments (or reports) that seek policy-relevance and implementation. Lastly,i had a highly enhanced outlook of the vital contributions of young professionals, myself in this case, to important and seemingly high-level outputs of this kind.

Restoring hope through the landscape and making restoration possible

Get Youth Involved and They will stay!