Old farmers never realize how much energy a young farmer can bring to the farm! 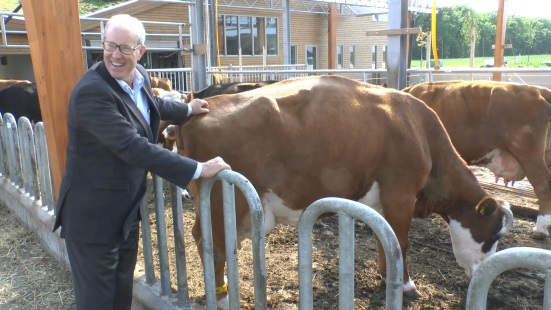 Last week a diverse group of people came together at the farm Veld & Beek in the Netherlands: young farmers, future farmers, old farmers, people from farming organisations and lots of press. They came to hear the story of Joel Salatin, according to Time Magazine the worlds most innovative farmer. Joels latest book  Fields of Farmers  deals with the problems and potential solutions of the land- and knowledge-transfer crisis that the current and the next generation of farmers are facing.

Direct marketing has always been the strategy of Joel Salatins farm Polyface. As farmer you have to try to get the full retail dollar, because this allows you to lower the volume you need to produce. If you can take the pressure of the volume, you can take the pressure of the infrastructure and the capital costs. Another of the advices Joel gave to the next generation of farmers is to use portable infrastructure. Portable infrastructure enables you to stack complementary enterprises on an existing land base and could provide the farm with additional incomes."

Some of the examples he mentioned were the mobile chicken houses, electric fences for the animals and mobile shade mobiles for the cows. Joel explained that portable infrastructure is also way cheaper and that it furthermore reduces the risks for the old and the young generation: If a relationship with an old farmer goes sour, you can move and find yourself a friendlier partner.

Joel sees a change for multigenerational farms that not just have a place for family members but also for farmers from outside the family. Every young farmer wants his Fiefdom within the total farm, his/her own profitable enterprise, for which he or she is responsible. Joel: I try not to work with employees, but rather work with self-employed people that work on our farm on their own business. Well make a contract with them  a Memorandum Of Understanding (MOU)."

Cooperation between the generation is a challenge: The young farmers always want to move faster than the comfort zone of the old farmer, and that could be base for friction. Joel: A young farmer never ever realizes how much work it is, but an old farmer never realizes how much energy a young farmer can bring to the farm." Joel believes that the old farmer has to open his arms to embrace the next generation and let them build complementary businesses on the farm. Only if a farm generates two or more incomes, it is sustainable. Joel: I know this is a difficult step, but then I advise this older farmer: Look into the mirror and tell yourself: I really want to grow old alone.

If you want to see the inspiring session with Joel Salatin, watch the video.

More posts from author
Tuesday, 27 May 2014 Old farmers never realize how much energy a young farmer can bring to the farm!
Thursday, 22 May 2014 Belias Brothers  Young family farmers producing wine in Greece
Thursday, 06 June 2013 Future Farmers in the Spotlight  Success stories of young farmers from all over Europe!