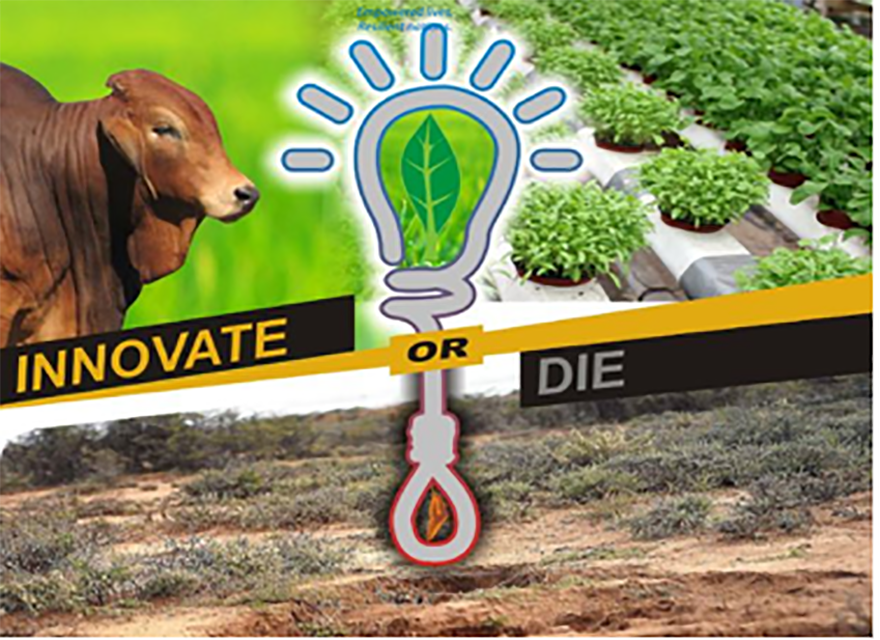 As the YPARD Zimbabwe Country Representative, I took part in the event both as a presenter and as a facilitator with a focus on youth and climate change. My presentation Putting Innovation (s) at the Heart of Climate Change in Zimbabwe focussed more on how to innovate for climate change and ways of building climate resilience among young agripreneurs.

In the spirit of knowledge sharing, here are some of the sessions i facilitated and their outcomes. Enjoy reading through them

Mr. Elisha Moyo’s began his presentation by illustrating the realities if climate change through pictures of extreme weather events such as droughts and floods. He also showed a picture of the signing of the Paris Agreement in 2015 by His Excellency President of Republic of Zimbabwe, Robert Gabriel Mugabe.  He stressed the differences in mitigation and adaptation as responses to climate change.  His presentation also touched on the fact that most of the Southern African countries economies are linked to agriculture including Zimbabwe.  The economic blueprint Zimbabwe Agenda for Sustainable and Socio-Economic Transformation emphasizes on energy efficiency.  Mr. Moyo described the climate system and how the greenhouse effect comes into being, when the normal state of the climate system is altered by various factors including agricultural emissions.  Global warming became a topical issue on the global agenda in the 1970’s when it was observed that the rise in temperature was contrary to the variations and that it was possible human activity (anthropogenic) was causing it.  He also indicated the importance of harnessing water to use for irrigation as a measure against unpredictable rainfall patterns.  He posed a question that in light of climate change should we really use flood irrigation? Mr. Moyo highlighted the urgent challenge being that of decoupling agricultural productivity and climate change.  He noted that the Government of Zimbabwe was ready to assist and work with young people.  Mr. Moyo distributed for free the Zimbabwe Intended National Contribution (2015) to all Session participants as part of the Ministry of Environment, Water and Climate mandate to improve climate change education and awareness.

The recommendations emerging from his presentation are as follows:

Mrs. Marongwe noted the observation that average crop yield in some cropping areas in Zimbabwe are low and that sustainable intensification can increase the yield.   Agriculture is a huge contributor to greenhouse gases, and also a potential area for mitigation efforts.  She described climate-smart agriculture and its three pillars: productivity, adaptation (resilience), and mitigation and reduction of greenhouse gas emissions and carbon sequestration.  She also emphasized the potential in Conservation Agriculture in terms of reduction of production costs.  Mrs. Marongwe alluded to a number of adaptation strategies such as post-harvest management of losses, livestock management, land utilization, and use of climate information. She argued that each activity that young farmers could be engaged in should make economic and business sense: “Cost your inputs. Is my output worth the inputs I have put in?” she said.

The recommendations emerging from her presentation are as follows:

Mr. Verengayi Mabika described his organisation, Development Reality Institute as involved in training a new generation of social entrepreneurs.  He then went on to quote the Chinese expression which describes “crises/opportunity”, as applicable to the challenges that the country faces in climate change.   He presented a global overview in various aspects such as the ecological footprint of all continents and poverty footprint.  He expressed concern over the reliance on fossil fuels in many countries around the world.  He noted that there was a close link between climate crisis and extreme events, notably when one closely observed the rainfall and temperature patterns.  Mr. Mabika noted that in 2100 Africa will have more people that China and India combined. This projection was of concern as the people would need land and food which are in short supply.  Agriculture contributes 30 percent of emissions in the atmosphere.  Mr. Mabika noted that the global systems vulnerable to climate change were food supply, water and public health.

The recommendations emerging from his presentation are as follows:

Question 1: How to link innovation from territory to industry?

Question 2: How to resolve the conflicts between mining and agriculture around the Midlands area?

Question 3: Why don’t the Government of Zimbabwe not explore the opportunities around desalination of ocean and sea water?

Question 4: How to access the climate funds under the Ministry of Environment, Water and Climate and others such as the Global Environmental Facility – Small Grants Programme?

Question 5: How can young farmers protect their innovations/ideas?

Question 6: What should be done with Legislative members who buy big vehicles?

Question 7: How do young farmers inform the technology developers that they need to modify the two-wheeled tractors? (The tractor is problematic as to the depth to which it can plough and the types of soil on which it can work).

Question 8: What can young farmers do about the high-input costs around drip irrigation and can one use borehole water to irrigate bigger pieces of land? (Addressed during the Plenary Session in the Afternoon)

Responses to Specific Question from the Speakers

Farewell to the Goofy Bug Guy