Scoring GOALS: My journey in the fight against global hunger

The sustainable development goals (SDGs) are global index to measure national development in areas such as economic growth, environmental issues, human capital development, food security and health, and many more.

The Goal Keepers initiative is one of the index established by the Bill and Melinda Gates Foundation established to track progress on SDGs and support implementation through policies and activities directed towards achieving the global goals.

Similarly, organizations, institutions, agencies and individuals are gearing efforts towards achieving SDGs, especially goal 1, No Poverty and goal 2, Zero Hunger. I am a passionate advocate of agricultural transformation, food security, no poverty and youth in agriculture. Over the past nine years, I have shared the same similarity and passion with my mentor  Dr. Akinwumi Adesina.

Dr. Akinwumi Adesina is the former Minister of Agriculture in my native country, Nigeria and current president of the African Development Bank. He won the prestigious World Food Prize in 2017 and the Sunhak Peace Prize in 2019. Dr. Adesina pledged the prize monies and a few matching donations totaling $1.1 million to the creation of the World Hunger Fighters Foundation (WHFF) with the aim of empowering young food innovators for a hunger-free world. The establishment of the foundation and the call for the first cohort of the Borlaug-Adesina Fellowship marked the beginning of my mission and vision to meet Dr. Adesina. 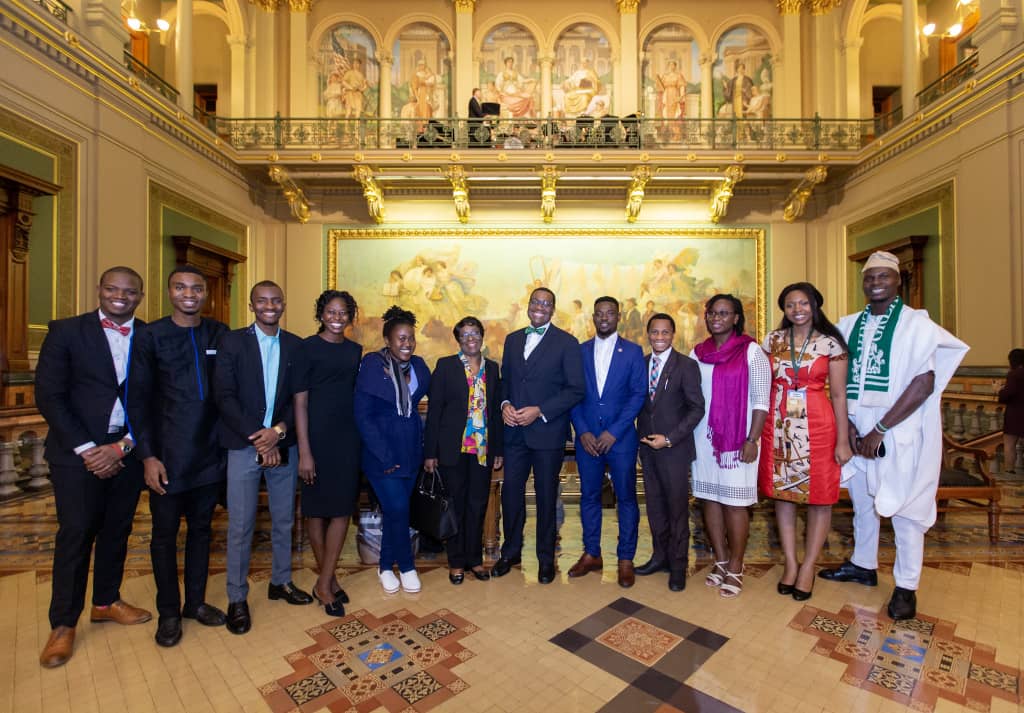 In July 2019, the WHHF announced the call for applications for the first cohort of the Borlaug-Adesina Fellowship. Over one thousand three hundred (1,300) applications were received from 39 countries in Africa, totaling 5 regions of Sub-Sahara Africa. The application process was rigorous. I carefully prepared my application for the fellowship given the credibility of having the name of the two most powerful hunger fighters in the world, Dr. Norman Borlaug and Dr. Akinwumi Adesina.

In most of my responses during the application process, I have detailed extensively my involvement in agriculture through the AGCO Agribusiness Qualification Program, AGCO strategic projects in Africa and how I am working extensively across Africa to solving the greatest issue of food security and youth in agriculture.

The 1,300 applicants were shortlisted to twenty potential candidates for the Borlaug-Adesina Fellowship. The screening process commenced with a video conference interview with the Chief Operation Officer of the Foundation. After days of preparation for the interview, the interview day was very engaging, testing and successful at the same time.

The different application stages had passed but the waiting continued for the official selection of the Borlaug-Adesina fellows. Indeed, patience is a virtue, especially when it comes to waiting.

It was a beautiful Thursday afternoon in the upper section of the Kenya Strathmore Business School library. I was engrossed in finalizing a commercial agriculture project concept for a client in the Democratic Republic of the Congo. Exactly at 1:10 p.m. on my way to lunch, I got the long-awaited email which had kept me awake for a number of days. Reading the subject of the email, I screamed, jumped and hugged a random person  what an excitement!

Dear John, It was wonderful getting to learn more about you over our call last week. This is why I am so delighted to inform you that you have been selected as a 2019 Borlaug-Adesina Fellow. Congratulation!!

The email continued, Indeed the Borlaug-Adesina Fellowship is the first of its kind to be dedicated to identifying the most gifted and rarest young agro-innovators in Africa, and equipping them with the tools and relationships to build and advance their ideas in food and science and agribusiness towards creating a hunger-free world.

I am in full agreement with a colleague who said, some emails are more valuable than cash prizes, because one email can change your entire career for good. 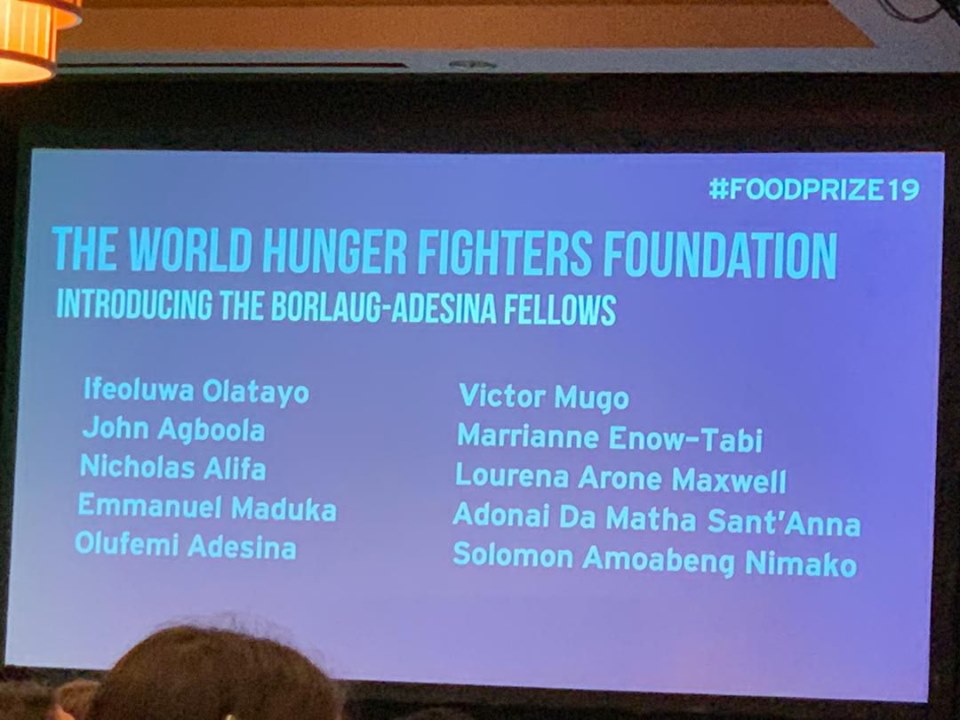 Days became so slow after the official email about the planned sponsor trip to attend the official launch of the WHFF at the World Food Prize Dialogue in Des Moines, Iowa, USA. After a series of preparation and emails on the trip to the US, the long awaited day arrived with lots of excitement and the tension to face different world leaders who are full of excitement for the next generation of agropreneurs.

My colleague who is a fellow from Kenya and I shared some exciting jokes of wearing a bold tie like our so-called daddy, the great Dr. Akinwumi. At exactly 2:45 p.m., Ada Osakwe, the COO for the WHFF, stood on the World Food Prize podium and announced with a soft voice, a very good afternoon to everyone and thank you for joining us in the launch of the World Hunger Fighters Foundation and the unveiling of the first cohort of the Borlaug-Adesina Fellows.

It was an engaging session with incredible remarks from Felix Tshisekedi, the President of the Democratic Republic of the Congo, former Nigerian president Olusegun Obasanjo, president of the World Food Prize Foundation, Ambassador Kenneth Quinn, chairman of the WHFF, Mrs. Grace Adesina and African Development Bank President and patron of WHFF, Dr. Akinwumi Adesina. The story for the official launch was published by the African Development Bank.

Thursday, 17th October 2019 is an important day in my life, and it is a turning point for me because I had the opportunity to meet, shake, hug and accorded the name of my mentor  Dr. Akinwumi Adesina.

On the 20th October, I shared a brief post on Facebook about my preparatory journey to meeting Dr Adesina in person.

The process to my meeting Dr Adesina is as follows:

2009/2010 - I made a decision to study Agricultural Economics and Extension and thus, identified and named Dr. Akinwumi Adesina as my mentor.

2013 - I wrote an undergraduate scholarship with a description of Dr. Adesina as my future ambition and finest inspiration.

2015 - All the graduating students from the department of Agricultural Economics and Extension at the Federal University of Technology, Akure named their mentors and role models in the final year Magazine. I wrote and named again, Dr. Adesina as my mentor and role model.

January 2019 - I tweeted about my 2019 goals and on top of the goal, is meeting, Dr. Adesina in person. I tagged every close stakeholders to him.

March 2019 - I missed him at the third edition of the One Planet Summit in Nairobi, Kenya.

September 2019 - I was selected for the first ever cohort of the prestigious fellowship (Borlaug-Adesina Fellowship) under the first pilot program of the World Hunger Fighters Foundation, established by Dr. Akinwumi Adesina and Mrs. Grace Adesina.

October 2019 - I added his name and Dr. Borlaug's name to mine as 'Borlaug-Adesina Fellow'.

17th October 2019, He announced our names at the World Food Prize dialogue and challenged all the fellows to go score our first GOAL for global food security, zero hunger and no poverty.

Reflecting on the journey of becoming a Borlaug-Adesina Fellow, I count it as a great honor to stand on the World Food Prize global stage with other nine amazing and talented Africans changing the face of agriculture and who are the NextGen Agropreneurs.

Throughout this process, my submission will remain that 'I am a Hunger Fighter', 'an instrument of change and transformation' and ultimately, 'a product of grace'.

Thank you for reading this article. Do join us in the fight against Global Hunger and become a Hunger Fighter.

More posts from author
Tuesday, 07 July 2020 Covid-19: A gamechanger in attracting youth to agribusiness
Saturday, 26 October 2019 Scoring GOALS: My journey in the fight against global hunger
Wednesday, 22 May 2019 Promoting inclusive Agri-preneurship Development for Youth in Africa

The role of networks in promoting food system transformations

Announcing the new YPARD representation in the EFARD management team