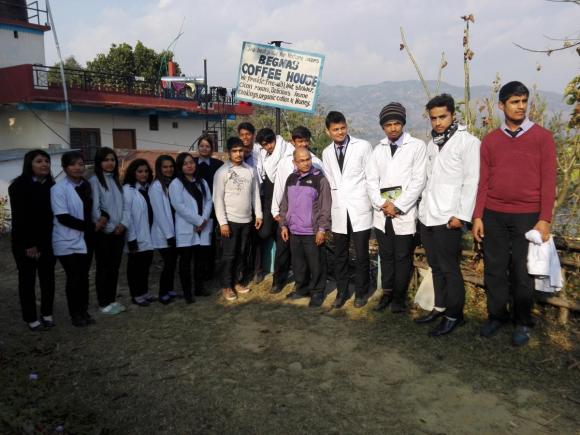 There is huge demand of the Nepalese coffee but the production is not meeting the demand. More often than not, when talking about the coffee people talk about the instant coffee.

This increase in the demand of coffee could be as a result of changes in food habits. In the fiscal year 2013-14 the Nepalese coffee imports increased from Nrs. 31.73 million to 34.8 million.  Similar justification was added by Mr. Arun Lamsal, one of the coffee entreprenuer of Kaski district. He is a farmer as well as a trader in coffee cherries. According to him, Nepalese coffee has huge market in Nepal despite the fact that when he started coffee processing every neighbour said to him that coffee has no future in Nepalese market. He started his journey as farmer.

During 1995 he just grew cherries and prepared green beans for roasting the coffee in his more than 4 ropani land planting the Arabica variety.He used cooking pot (????) but due to non spherical shape the aroma of coffee was not as expected. Over time he has perfected his skills. He had also attended some of national and international coffee cup tasting workshop. His skills came from an American tourist who was staying in his guest house that year. Afterwards, he has become an instructor to various resource persons from NGOs, INGOs or government officers financially or technically.

Currently, he is producing around 1000 kg coffee annually. Last year he was provided a coffee roasting machine from FNCCI Lekhnath which has increased his processing rate. However due to the fuel shortage,the processing rate has decreased and a huge amount of cherries were damaged due to fuel shortage. The price of 100g roasted and grounded coffee is Rs 250 and one kg costs Rs 1350. He is also promoting agrotourism too he has owned his own guest house. He has his own vermicompost farming where he is manufacturing organic manure for coffee plants.