Education is the key to a successful society; If you educate a woman, you have an educated society.

Imagine a planet where farmers, particularly the rural African women, learn, know how to and produce highly nutritious food. This would considerably bring positive impacts on health, nutrition and additionally increase farmers income. Women play a significant role in society, in food security; they are the backbone of the rural economy, especially in the developing world. 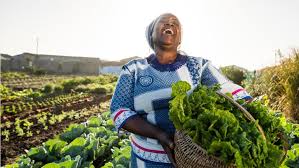 while millions of people go to bed hungry. There is the need to go beyond policy initiates and place more focus on the ground action. FAO initiative action promotes gender equality as a fundamental human right and an essential means of achieving its development goals of sustainable rural development, food security and nutrition. FAOs objective is to achieve equality between women and men in access to resources, services, production and in decision-making, to promote sustainable agricultural production, food security and rural development.

According to President of the International Fund for Agricultural Development (IFAD) during the opening plenary of the Committee on World Security (CFS); To ensure nutritious food accessible to everyone and transform rural areas to places where there is hope for the future. Empowering and investing in rural women was to be considered a way to go. Over the years, women have proved to be productive in rural livelihoods. In most developing countries, women are responsible for nutrition and food security at the household level. Yet, they are not well recognised instead they hold the smallest percentage of land.

On average, about 43% of the agricultural labour force in developing countries are women, according to research by the FAO Gender Department. Whilst 79% of these women largely depend on agriculture as their primary source of income. Most households are directed by women yet their access to productive resources is limited. On the other hand, the effects of climate change make all the customary responsibilities of the women uncertain and risky, yet they have no voice in decision making processes on policies regarding the environment.

Some research indicated that a rural woman normally works longer than a man. They are employed for labour-intensive tasks, yet they earn lower than men. Based on the knowledge that farming alone does not often sustain the family, the off-farm economy has become an important source of household income. The rural women should be empowered enough to have an equal chance to benefit from this opportunity as men.

When women are faced with the struggles of the world such as climate change; they turned to find new alternative ways to ensure income and food to feed their families. Usually, it is a struggle for women to access resource such land, water, inputs, and raw materials, generally, if they were to hold land it will be small and of inferior quality- as a result, threaten their food security.

Often Government organizations, agricultural bodies, universities, companies and other agriculture institutes should come up together with one objective; to help support and improve rural women, As a result promoting sustainable development, empowering women, improve food security and nutrition and help no increasing womens income so that they can meet their daily requirements.

There is a need to encourage rural women to participate in farmer organizations and cooperatives to empower them. By doing this, it reduces rural womens isolation while building confidence, leadership, and security. It is time to bridge the gender gap because it will boost food and nutrition security globally and increase agricultural output. This is the journey we all must be willing to take to eliminate hunger.