Youth and Ag workshop in Pakistan - my thoughts 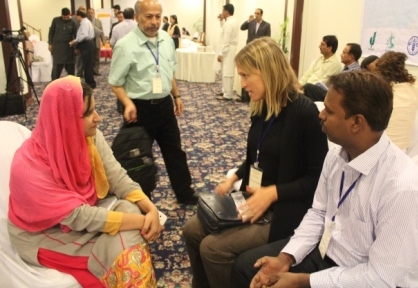 The workshop brought to light some interesting aspects related to youth in agricultural development.

The first day focused on integrating the work of the CGIAR with those within the regional fora.  There was a strong appreciation by those in attendance of having organized a meeting in Pakistan, where many have tried unsuccessfully to have a meeting for a long time.  Thomas Lumpkin, the DG of CiMMYT provided some CGIAR examples of youth initiatives including the CIMMYT Borlaug Pioneers program which will soon be launched and IITAs agripreneur program (which, incidentally, has a strong link to the YPARD Nigeria country rep!).

The next two days, were the youth focused sessions, which I was most interested in.  APAARI and PARC introduced the meeting, saying that the room was full of decision makers who inform policymakers to make changes in their countries.  There was an emphasis by Simon Hearn, the Chair of APAARI that agriculture as a career choice of youth has to compete with other sectors, so we need to demonstrate what agriculture offers that other sectors cant.

Presentations were wide ranging, with many highlighting what youth need, but not many providing tangible examples of what they have done.  This further emphasizes the need for the ARD community to take action and commit resources to taking real action on youth issues.  Some examples I found particularly interesting of included:

Indian Farmer:  There will always be young people in agriculture.  With the number of youth and the available jobs, we will always find youth on the farm.  The issue is how to attract and retain the brightest youth into agriculture

AFA provided some examples of youth engagement in its different member countries, ranging from

Innovation in capacity building: was raised several times and was emphasized that it is important to provide skills that go beyond mere technological/professional expertise such as communication, facilitations, team work (enable people to look beyond the boundaries of their own profession).

The summary from the breakout sessions was productive, although real commitment to these outputs is required.  The points raised will be available when the meeting minutes are finalized.

Several people lamented the lack of young people in the room, including myself.  Some people disagreed, feeling that the decisions first needed to be made at the higher level to obtain the commitment from the senior professionals to engage in this but others.  However, I felt, and stated, that it should be a conversation between the two.

As YPARD my message was that I felt that we do need more younger people present, to engage in a dialogue with experienced professionals  neither group should make decisions in isolation.  I was happy to see so many experienced and influential people taking an interest in the topic and during my presentation I implored them to go back to their institutions and put youth as a priority issue.  However, I warned, do not make decisions and take actions without a full consultation with your youth constituents.  I hope that this topic raises in the priority list and that youth are the true drivers of the process.

When I grow up I want to be a scientist

"Think, eat, save" gives the tone

10 years of YPARD! What have we learned and where are we going?