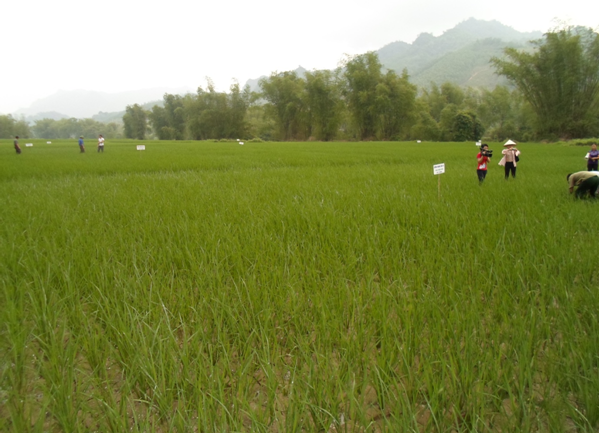 A community or village is normally treated as a unified unit consisting of various individuals who share various common resources and institutions. Practitioners have indeed implemented development projects in this so called “community”. The concept of the community was however challenged during the Sixth International Conference on Community Based Adaptation (CBA6) held in Hanoi, Vietnam from 16th to 22nd April 2012 as participants called for realistic assumptions when reporting the achievements of various adaptation projects. The participants acknowledged that while we need to consider simplistically community based adaptation to climate change, we also need to understand the power relations, statuses and structure within communities. Thus a disaggregation of this so called “community” is necessary. Among the various vulnerable members of the communities to the impacts of climate change, the following groups were put on the agenda during the conference: children and youth, indigenous peoples and women (gender).

Parallel session 8 of the CBA6 was on gender in which the gender based adaptation methods were proposed considering that it is women who suffer most the burden of climate change. The nexus between climate change adaptation, youths/children and indigenous knowledge was tackled in Session 3 and session 11. The Session 3 of the conference was on “Children as drivers of change” with a subsequent training workshop on methods and tools for working with children on climate change adaptation. It was in this session that organizations like Plan International, UNICEF, IDS and Save the Children proposed a child centred CBA or Disaster Risk Reduction Approach.

The session 11 of the conference was on Vulnerable and Indigenous Communities. It was generally reiterated that indigenous communities are not fully involved in the design, implementation, monitoring and evaluation of various CBA activities organizations are implementing. The participants recognized the challenge of the knowledge powers in which indigenous knowledge is subdued yet it is this knowledge that has allowed the communities to survive unimaginable changes in climate. The nexus between indigenous knowledge, youths and climate change was underscored to be difficult to study considering the rapid IK erosion among the youths as they advance in education, migrate and intermingle with knowledge trends. There are however various questions we need ponder when looking at the nexus between climate change adaptation, indigenous knowledge and youths which needs to be addressed if any CBA work is bear fruits.

The first question is whether indigenous knowledge (IK) is worth studying or tapping into. Critics of IK have argued that IK is no longer credible in this uncertain world and that it is primitive for any meaningful adaptation to climate change. While there is truth on a more unpredictable world, it should also be noted that science has not yet provided the solutions either. In the context of developing countries, scholars have argued that researchers/ scientists are yet to reorient with the truth that while they are busy analysing climate data using 30-50 year time scales, farmers are actually making decisions on their farming each day, week, month and season. And indeed while scientists are busy focusing on meteorological droughts, farmers have their eyes on the agronomic droughts (Ovuka and Lindquist, 2000 and Slegers, 2008). The other fact for developing countries is that longitudinal climate data is sparse and potentially unreliable. With little evidence and sparse meteorological data locally on many facets of climate science, only peoples experience is therefore reliable and valid.

The other difficult question is why should we take a youth perspective when it is already known that IK resides in the old minds of the community members and that household, community and national decision making is in the hands of the grownups. Using Africa as an interesting case, we know that more than 60% of the population in most African Countries are youths. Yet they face the highest unemployment rates. What therefore remains is a huge demographic dividend that would both help in building up the adaptive capacities of the communities as well provide solutions for climate change adaptation. We are actually missing the opportunities accrued to the youthful generation!

On doing research that combines both climate science, youths knowledge and IK, the first challenge is on whether we have proper tools for studying this. My take is that we have the tools only that we have only utilized the tools that are within our comfort zones. A simple case is where we specifically indicate in our research protocols that the respondents should either be household heads or an elderly person within a household and that FGDs should be attended by those who are elderly. This already leaves out the youths in the whole research agenda. More so in the “doer context “(researchers) as age experience is considered more important than the potential to creatively provide solutions. In the context of statistical climatic data analysis, we have relied too heavily on meteorological data which is unfortunately not reliable or not available for most developing countries. In addition, our analysis has relied only on the frequent statistics while neglecting the Bayesian Methods yet they have potential to capture various knowledge sources.

The Power-Point presentation by Mr. Maxwell Mkondiwa at the CBA6 Conference in Vietnam is as follows:

More posts from author
Tuesday, 23 July 2013 Targeting and Financing of Agricultural Research in Africa: The Great Paradox
Tuesday, 18 June 2013 Reflections on Agricultural Innovation in Africa: its Scalability and Youths
Thursday, 03 January 2013 Reminiscences of a YPARD Member at ICPD Global Youth Forum in Bali

EduMala as a Turning Point

Restoring hope through the landscape and making restoration possible

Fisheries in Africa: a gloomy situation?

YAAD, a gateway for youth opportunities in Agriculture