Youth and Agriculture: Fresh Approach for a New Paradigm

The CGIAR Science Forum 2011 held from 17th-19th October  2011 in Beijing, China under the theme “The Agriculture-Environment Nexus “ was organized by the Independent Science and Partnership Council (ISPC) of the CGIAR in cooperation  with  the Consortium  Board  of  the  CGIAR,  the  Global  Forum  on Agricultural  Research  (GFAR)  and the Chinese Academy  of Agricultural  Sciences  (CAAS). The uniqueness of this year’s Forum was the presence and participation of young scientists and YPARD members, and this aspect was duly acknowledged by the chair of ISPC, Kenneth Cassman. 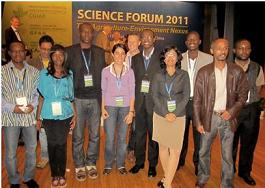 As YPARD participants in the forum, we herewith assemble wide-ranging perspectives on Youth and Agriculture. The need for youth participation in agriculture was deliberated during conference with concerns over the ageing farming community as young generation of agriculturists do not consider the field of agriculture very lucrative. It was commonly agreed that sensitizing the youth to get involved in agricultural production and environmental conservation is vital.The active involvement of youth in agriculture would require new approaches to address increased productivity and profitability of farming through policy and institutional support, technology application, improved market links and capacity building. It was reasoned that in order to gain attractive financial returns from the agriculture, the new generation of agriculturists needs connection to technology and institutional/ policy backing to optimize operations for all points of the agricultural value chain. In many developing countries general population of poor farmers including marginal number of young farmers involved in agriculture use inefficient means of production, thereby not gaining much return from their investments. It calls for sensitization, capacity building and active participation of youth in agriculture and environment value chain management. Diverse perspectives for effective involvement of youth in agriculture were discussed by the Young Professionals among themselves and with the experts. Some key points are listed.

From the perspective of young professionals, it is evident that they have an important role to play both as researchers and entrepreneurs in the agricultural sector. This close association will provide a foresight for young professionals (foreseen future decision makers) to address issues at grassroots level in conjunction with policy decision at macro level.  Discussions pointed to the suggestion that young researcher’s needs to be proactive, to undertake demand-driven and results-oriented research that will address the questions raised during the discussions. For example while envisioning broader objectives such as ‘What mechanisms are to be put in place to improve livelihoods of smallholder farmers in next 20 years?’   local level goals such as  ‘Adequate security for smallholder farmers in terms of their social and economic livelihoods so that agriculture becomes a lucrative business rather than the perceived poor man’s venture?’are also factored. While leveraging from the existing platforms relationship and extension activities set by the current and older generation of agricultural researchers, the young researchers and agriculturalists should inculcate the ability and capacity to change the status quo in order to suit emerging global trends in agriculture.

In summary, participation of the YPARD members at CGIAR Science Forum 2011 provided a space for young scientists to express themselves, challenge long held traditions and contribute towards global research priority setting. This trend is however expected to change with the strong and important contributions that YPARD members made. Indeed, such initiatives can go a long way to stimulate youth’s participation in global discourse and play an active role in priority setting.

You can read the full report of the sessions attended by YPARD Young Scientists. This highlights key points discussed, gaps detected and suggestions on the role of the youth and how to get them involved.

More posts from author
Monday, 07 August 2017 Agenda 2030: The role of youth in peace, security and sustainability
Friday, 26 May 2017 Youth as a catalyst for delivering on the SDGs  A connection we cant afford to ignore
Monday, 01 August 2016 Youth, Agriculture, Food and (sustainable) Development- The 2016 agenda