Farmers rights: The food is in their court! 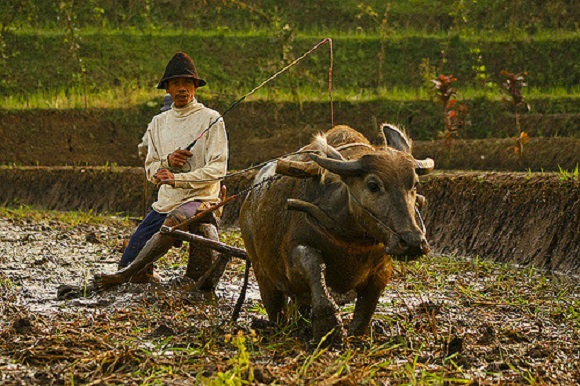 “I’m responsible to meet the needs of my family, especially my children. They are the only motivation for me to keep working as a farmer”, explained Darwan, a farmer and also a father of two children.

Darwin has worked as a farmer for years and still, his life is not getting better, let alone wealthy. The life of Darwan uncovers the portrait of Indonesian farmer’s lives, where ironically, they are fighting to feed the people yet their own life is at stake.

There are a lot of ironies hiding beneath the stories of local farmers which play a role in a decreased number of farmers over years. Truth be told that young people are the future leaders, yet not much of them want to work in the agriculture field, especially as farmers.

Central Bureau of Statistics of Indonesia states that the number of population who works in the agricultural sector keeps diminishing from 39.22 million people in 2013 to 37.75 million people in 2015. In between the numbers, the statistics mention that while the current farmers are growing older, the young people’s desire to be a farmer is diminishing. Looking at the numbers, to provide as much as 7.55 million tons of rice demand is a big bite than the farmers can chew. While other countries are ready to have their rice imported, our countries put their farmers’ life at the edge of the bridge.

“We don’t get what we need; we don’t get incentives, don’t get a good irrigation system. We don’t get what is worth with our effort, that’s why working as trader is more profitable”, explained a son of Darwan honestly. How can we expect the farmers to fulfill their responsibilities when they even can’t get their rights?

Actually, the rights of farmers have been arranged in Farmers’ Rights which was initiated by FAO years ago. Farmers’ Rights gives government the responsibility for implementing Farmers’ Rights and lists measures that could be taken to protect, promote, and realize these rights.

In accordance with farmers’ needs and priorities, national government should take measures to protect and promote the rights, including: protection of traditional knowledge relevant to plant genetic resources for food and agriculture, the right to equitably participate in sharing benefits arising from the utilization, and the right to participate in making decisions.

All these things are strived to reward the farmers for their contribution on global genetic pool and food security. At the same time, all of these are intended to keep farmers involved in using, storing, and utilizing their land.

The Implementation of Farmers’ Rights

“The realization of farmers’ rights as one of the outstanding issues for further negotiations” – Mario Marino, Technical Officer, The International Treaty on Plant Genetic Resources for Food and Agriculture (ITPGRFA)

The aim of the GFAR Webinar on Farmers Rights: Achieving Complimentary between the Informal and Formal Seed Systems was to achieve the mutual understanding between practitioners and people about farmers’ rights and its implementation. Partnership and collaboration among local, national, and international parties are a simple, yet crucial way to put the farmers’ rights into realization.

Partnership and collaboration will integrate the purpose and opinion between the collaborative parties from different places to realize farmers’ rights, as happened in Global Consultation on Farmers’ Rights in Bali, back in 2016. Despite of farmers' rights' implementation in real life is running at a slow pace in terms of capacity and resources, Global Consultation has achieved mutual understanding and shaped regulations to support the rights.

In his presentation, Mario indicated the joint program on capacity building by GFAR and collaboration within FAO different units as a good synergy to follow up the preparation of the important steps on farmers’ rights implementation. In order to achieve the mutual understanding about farmers’ rights, partnership between stakeholders plays the important role in forming wide webs which connect one part with the other, and this web will not only be profitable for one party, but also for various parties.

These webs will take us to the life of farmers in Africa, where farmers have formed their own Community Gene Bank. Gloria Otieno shared a story about farmers’ life in Africa and their indigenous knowledge in her presentation. Gloria mentioned how the active participation of farmers in capacity building activities has helped them to share, use, cultivate, and conserve their improved and quality seeds.

The strong bond between local NGOs, international and national agricultural research, and international and national gene bank collection have encouraged the farmers in developing themselves. To overcome the difficulties in obtaining the quality seeds and counteracting the impact of climate change on crops, local NGOs gave them technical supports such as giving training on conservation, proper agricultural practices, and decent harvesting system, and even providing incentives to develop their farm.

The support has led one farmer to conserve as much as 26 varieties of banana in his field, and at the same time to establish an in situ banana seed bank. In general, the incentives program and the support from various parties have helped the establishment of Community Seed Banks in Zimbabwe, Uganda, Tanzania, Kenya, Zambia, and Rwanda, in which one of the seed banks has conserved 69 plant varieties.

In order to improve the quality of foods and to increase the welfare of farmers, farmers are given a free access to obtain quality seeds from International and National Gene Bank Collection. They are also given rights to evaluate, to select, to save, to exchange, and to share the seeds in order to increase their life quality.

Africa has shown the right practices to realize Farmers’ Rights in their farmers’ life. The implementation of farmers’ rights is not happening at once, but gradually over time. The effort to improve the quality of farmers and food is not coming from one party, but from the collaborative action between parties.

Fulfilling farmers’ rights means an increasing supply and quality of foods. Darwan is only one of the farmers who had not obtained his rights fully. There are a lot of people like Darwan in Indonesia and it is in our hands to not make them suffer even more rather to feed us. Farmers’ Rights is a form of our appreciation to farmers for their contribution in providing foods for us.

More posts from author
Friday, 23 June 2017 Farmers rights: The food is in their court!

YPARD presentation at the GCHERA