Habimana Jean Claude is a 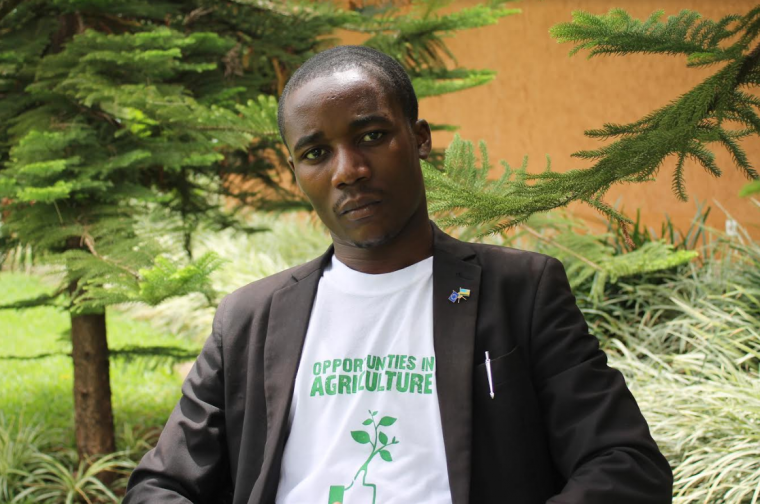 science communicator with over six years of experiences in agricultural communication. He has a Bachelors Degree in Communication from the University of Rwanda. He was born and raised in Rwanda. At present, Jean Claude is a Cornel Alliance Global Leadership Fellow 2019 and he is looking forward to continuing his study in Masters in Agricultural Communications at Texas State University in the United States of America.

Due to his digital journalism skills, he has experience in developing multimedia contents. Jean Claude has led many projects related to community engagement and social behaviour change communications in his country Rwanda. In his previous works, Jean Claude was appointed by the Food and Agriculture Organization of the United Nations (FAO) to document the successful project implemented by (FAO) in 15 countries. He has also documented USAID projects in Rwanda shooting videos, photos and success stories. In his work with USAID, he documented six cooperatives of maize farmers in Rwanda.

He has also done independent consultancies as a videographer in many projects. For example, in 2018 he was appointed to document Swedens project works in University of Rwanda known as UR-SWEDEN Program.

Jean Claude has also led communications of the University of Rwandas College of Science and Technology as Communication Officer. While at this position, he maintained the good reputation of his institution by linking the institution with media and development partners as well as handling both external and internal communications.

Jean Claude has received several awards related to his works. In 2018, the Ministry of Agriculture and Animals Resources, Rwanda adjourned him the best agricultural communicator of the year. He was also awarded four times in a row by ActionAid International to have excellently documented and reported the challenges that women face in rural communities.

Due to his achievements, Jean Claude was invited several times to attend and share his experience at international level meetings. In 2018 from November to December he attended the COPMOP18, UNBIODIVERSITY Summit in Egypt with participants from various countries around the world. He was also invited by USAID to participate in workshops related to modernized agriculture in Ethiopia and in Kenya.

Jean Claude currently is the Coordinator for Rwanda Agriculture and Environment Communicators (RECARWANDA). This association connects young graduates and post-graduates of the school of journalism and school of agriculture with the aim of inspiring young peoples involvement in agriculture as well as actions aimed at sustaining the environment. The association promotes urban farming among the youth as the majority of people today are living in cities these days.

Recently this May 2019, Jean Claude was among the top six global youth who documented two minutes video related to how smallholder farmers use agroforestry to fight against soil loss and erosion. He was also listed among the thirty youth influencers in agriculture and environment from Africa by the Global Environment Facility (GEF).

Jean Claude with his social media and communications skills, Jean Claude who has been a member of YPARD since 2016 is happy to join the YPARD Rwanda National Team as Communication Focal Person. In his interactions with the YPARD Rwanda Team, he said that he is committed to upholding the chapter by promoting agribusiness, innovations, and startups to the youth in Rwanda and linking them to all available opportunities in agriculture.

To get involved in YPARD Rwanda activities, please contact Jean Claude via This email address is being protected from spambots. You need JavaScript enabled to view it.

IT IS REALLY COOL TO FARM