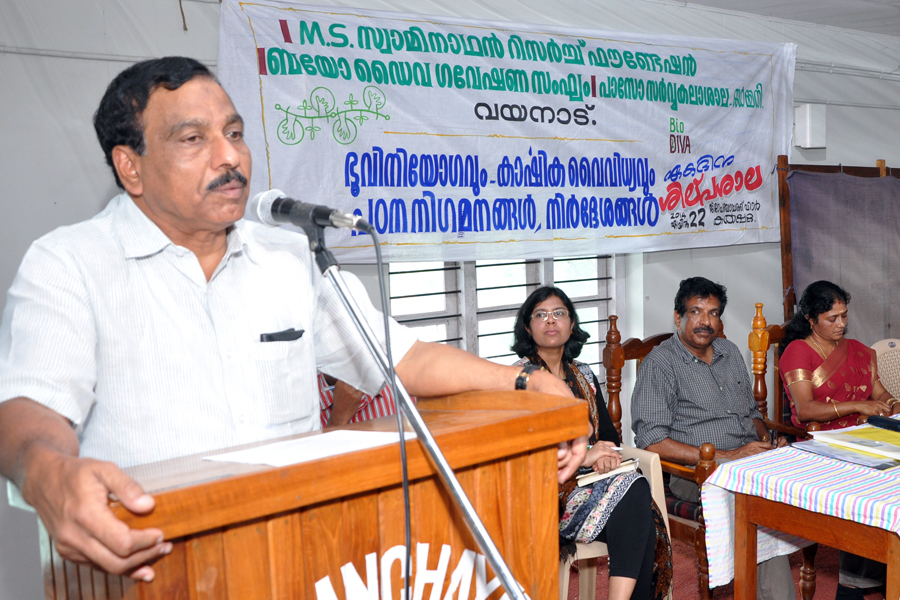 When we translate this understanding for agriculture sector or an agro-ecosystem, the farming society fits as the social dimension, markets and related value chains constitute the economic dimension, the land as the ecological resource or dimension and crops, the main component of that resource. Traditionally, agriculture was regarded as a cultural activity. In contemporary times it is turning to be an economics-driven process under the influence of multiple factors such as market demand, export dominated mind set, trade, cost-benefit dynamics, and inflation and not to forget- the policy atmosphere.

Food production as a key activity to ensure global food security drove intensification of agriculture and also leading to many other impacts that were beyond the direct economic benefit. For example, farmers started to proportionately shift towards ‘low input- high value’ cropping patterns compromising on local indigenous crop varieties and thus causing agrobiodiversity loss. Also, at stake were long-existing local food and nutrient supply and largely, an ensured food security for the community. This observation is undoubtedly a common story in many regions in the world-map with once thriving agrarian societies.

Federal policies in many parts of the world favored such practices through policy support, mainly through subsidized seeds, subsidized energy (electricity, fuel) and subsidized pesticides and fertilizers.  As a result, agriculture gained productivity, mechanization and intensification and as well lost things that didn’t figure as most significant. For example, in traditional agriculture system, females were frequently engaged in agriculture activities right from sowing to harvesting to marketing.

Rice cropping regions of Asia is a good example to examine this argument.  During a research exercise in South India- Kerala (Bio DIVA) we noted that most farmers are opting out as rice growers and shifting to economically beneficial banana plantations or other high value vegetables. This has led to a considerable decline in rice production in the last three decades and affected women, who worked as rice-planters depriving them of livelihood opportunities.

Interaction with local farmers revealed that they are conscious observers of this change, but not very clear about its long-term consequences. The fact that the regions demand for the essential food grain (rice) is now satisfied by the nearby provinces or other regions in the country, clearly projects the worrying situation. At large, with the changing trends and current transitions in agro-ecosystems management the importance of gender division has diminished considerably. More often, females are left with marginal roles or in many cases there is no involvement. After hard efforts by several experts and institutions to regain the gender dimension in agriculture mainly during last decade, the current discussions on the issues of land ownership, decision on crop selection or income division from the cropland are taking account of perspective of both genders.

The Gender and Agriculture Program of the CGIAR (the Consultative Group on International Agricultural Research) at the global level and bilateral initiatives like BioDIVA at the regional level can be appropriately quoted as some initiatives among others which are ensuring that women are well represented and actively involved in agriculture. As this effort is steering the agriculture growth towards positive change, one can refer to this guided shift as the fourth dimension in Agriculture Sustainability planning and management.

Stimulating the Youth to remain Agriculturists

Our project followed a transdisciplinary approach which means adopting clear ways of interaction with stakeholders on issues outlined in the research outcomes. The goal was to build consensus, set priorities and identify gaps. Towards this, regular multi-stakeholder dialogue sessions were conducted taking account of the stakeholder set up and the local-administrative arrangements. This means not only involving the farmers but also local federal officials who interact with the farming communities on day to day basis related to agriculture issues and civil society organizations.

During one of such workshops  -Land Utilization and Agriculture Biodiversity- held in April-2014, the district president of the local governing body –Panchayat clearly mentioned that indifference of young people towards farming activities  is something they anticipate will severely impact agriculture production of their region. He stressed that agriculture research activities should factor this dimension and propose ways of stimulating youth to remain as active and enterprising agriculturists.

It is revealing to note that this observation is drawn at the grassroots level by the stakeholders who are struggling to preserve the ‘culture’ of agriculture against all odds. As the scientific communities draw recommendations based on causes and impacts in several domains like markets, policies, changing climate, degraded soil, irrigation demand, cropping methods and farm management. It would be a gross oversight, if we as a global community fail to pay heed to footing of the agriculture future-THE YOUTH.

The rural youth is not motivated to remain engaged in the agriculture as employment options in other sectors seems to have a better face value (or societal value).  Motivated by the thought to secure the future of agriculture, it is imperative that the role of youth is not any longer underestimated. And, it was not until recently that this fifth dimension started to take shape and gather attention. YPARD was a foresight to tackle this emerging situation through its attempt to establish a global drive in stimulating youth evolvement in wide-ranging agriculture research and development activities. However, this fifth dimension still waits to find attention in all initiatives and interventions of the agriculture sector. Ongoing efforts of encouraging youth in agriculture still remain focused on research community or partly on the advocacy sector.

More posts from author
Monday, 07 August 2017 Agenda 2030: The role of youth in peace, security and sustainability
Friday, 26 May 2017 Youth as a catalyst for delivering on the SDGs  A connection we cant afford to ignore
Monday, 01 August 2016 Youth, Agriculture, Food and (sustainable) Development- The 2016 agenda