Biting Back Insects for a Sustainable Future

Just a few people realized that we only have 35 years to be prepared for world's greatest threat: overpopulation.

As reported by the United Nations, the world population is projected to reach more than nine billion people by 2050. Sadly, the growing number of population is not followed with the availability of land for human activities, particularly agriculture.

Agriculture plays a key role in the entire life of a given economy such as providing employment opportunities to very large percentage of population, in addition to providing food and raw materials. On the other hand, agriculture is among the greatest contributors to global warming and accelerates the loss of biodiversity. With such alarming challenges, we have to stand up and make an everlasting improvement for the future of the Earth. But the questions ‘who’ and ‘how’ need to be answered.

A team from Brawidjaya University, Malang is combating global food challenge through their innovation in Thought For Food Challenge, a competition held for university students throughout the world to develop breakthrough projects to feed 9 billion people by 2050. The team who consists of four students: Mushab Eddy Nursantio, Anik Haryanti, Muhammad Ifdhol Syawkoni, and Musyaroh Syamsuri—all studying Agroindustrial Technology—saw an opportunity to develop a breakthrough solution by inventing a cooking oil made of insects. Although they come from the same study program, each has different roles in the team based on their competencies and interest: Mushab is the initiator and taking the lead of the project, Ifdhol acts as the processing engineer, Anik is the food nutritionist and Musyaroh designs the systems in this project.

Biteback Insect Mineral Oil, the name of their product, is a cooking oil derived from the processing of mealworms through an affordable extraction technology. An insect-based product is maybe nothing new under the sun and has been discovered for many years. However, there are not so many people practicing this healthy lifestyle which is scientifically known as ‘entomophagy’. In fact, mealworms are undeniably rich in iron and their inclusion in the daily diet could improve iron status and help prevent anaemia in developing countries as anaemia contributes to 20 percent of all maternal deaths according to FAO. 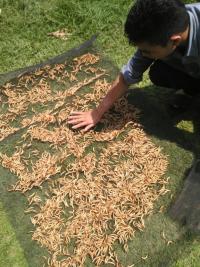 Not to mention the newly haze problem caused by slash-and-burn practices to clear the land and grow palms, the Biteback Insect Mineral Oil could replace the use of commercial palm oil and reduce the number of deforestation in Indonesia. It is much more sustainable and nutritious compared to palm oil. For example, palm oil has nothing but fatty acids, vitamin A and E, and several antioxidants whilst Biteback Insect Mineral Oil contains not only the aforementioned but also minerals and amino acids which make it highly rich in nutrients.

Another good reason why this insect mineral oil overweighs the palm oil is the cultivation area needed to produce cooking oil. The average production of palm oil worldwide is around four tons per hectare per year. Regrettably, palm oil industries cost much more damage to the environment rather than the benefits. On the other hand, breeding trials conducted by E.U. Initiative have found that over the same area, insects can be produced at least 150 tons per year.

With 21 percent of yield of insect mineral oil, that means 31.5 tons of insect mineral oil can be produced each year with less water, land, and energy needed as well as reducing greenhouse gas emissions. The biggest challenge of getting this product commercialized might be the struggle to convince people to adopt entomophagy. Most consumers are close-minded, unwilling to try new things and simply ‘disgusted’ by bugs, although more and more interest is being shown in the idea. It will probably take decades before we have insect mineral oil as our primary cooking oil. Nevertheless, the team constantly improve their product through countless hours of trial and error with great enthusiasm in achieving food security. The day when we do not have to feel guilty again when frying our foods will surely come.

So, have you considered to live a sustainable life? Biteback Insect Mineral Oil is addressed to you!

Facebook Twitter LinkedIn Pinterest
Tags:
FORAGRO Ypard Peru cooking oil mealworm TFF Challenge
You dont even have to be in the room
Bringing food traceability from farmers to the han...

Call for applicants - YPARD country representatives for the European region

On COVID-19 and food security: A Brazilian youths perspective