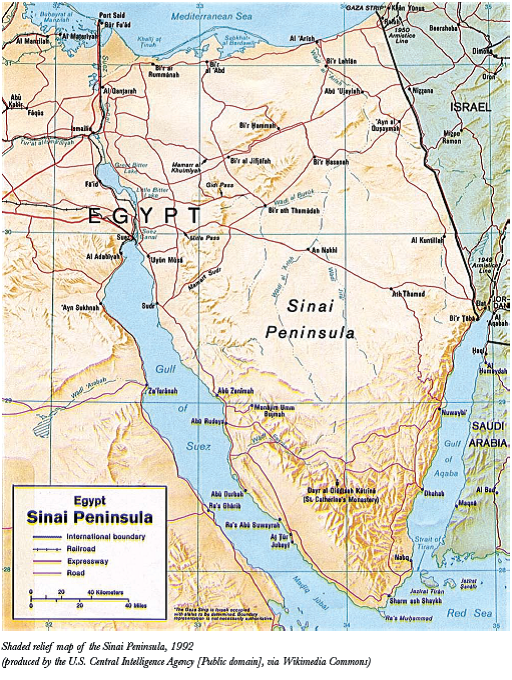 The Egyptian Peninsula of Sinai is a strategically significant triangle bounded by the Mediterranean to its north, Gaza and Israel to its east, and the Suez Canal to its west. Through the Suez Canal, Sinai serves a land bridge connecting Africa and Asia. Moreover, some 8% of global trade transits through the Suez Canal, including 3 percent of global oil supplies. The peninsula is 60,000 square kilometers, and it makes up 6% of Egypt’s land mass.

Following the ouster of the Mubarak regime in Egypt in 2011, Sinai has been experiencing unprecedented waves of terrorism that poses major threats to Egypt, neighboring countries and the future of peace in the region. Levels of security and stability have been dwindling in the region, leading to more lawlessness and making the peninsula a possible trouble spot for extremism and banditry. According to a recent report, the number of terroristic attacks grew from an average of 5 attacks in July 2011 to about 112 attacks in July 2013.

Restoring stability in this strategically important region has become an urgent national priority and more so a national security issue. A look at the Egyptian government interventions indicates that the government has adopted a heavy-handed approach to respond to these challenges. Particularly, the Egyptian army has launched a large military operation which resulted in the killing and arrest of militants operating there.

However, there have been few concrete signs of the army effectively curbing the threat. According to Hatab (2006), this alternative, police and military operations, has almost been the single dominant solution that has been relied on to restrict illegal activities in Sinai and this has always resulted in increased tensions. Other alternatives through socio-economic development have always been marginalized and neglected.

Socio-economic development indicators in Sinai show that local people face numerous social, economic and political grievances. Unemployment is one of the major challenges that exist in the region. According to the statistics of the Central Agency for Public Mobilization and Statistics (CAPMAS) (2014), unemployment rate in the northern part of the region (North Sinai) is estimated at 14.1%, and about 9.8% in the southern part (South Sinai). Statistics further indicate that unemployment among the youth is the highest in the region, where the rate is 36.4% for the age group (20-29 years) and 33.7% for the age group (30-39 years).

The unemployment-violence link is evident in the literature, while Keller and Nabil (2002), for instance, show that the lack of jobs causes people to look for other means to support their families including illegal activities such as smuggling, drugs, trafficking in arms and humans, and terrorism. Yossef (2011) points out that due to few opportunities for legitimate employment in Sinai, trade has flourished in narcotics; weapons; and the trafficking of goods and people in and out of the region.

In searching for development alternatives to restore stability in the region, Small Sized Enterprises SSEs represent themselves as a potential mechanism to achieve this objective. It has been widely recognized that SSEs do play a vital role in both developed and developing economies (Nilgün, 2002). The role of SSEs becomes more crucial in developing countries because they act as major job providers and have also potential to improving income distribution and poverty reduction (Pandya, 2012).

While Sinai is endowed with a unique climate and geographic location along with a comparative advantage in the production of a number of vegetables, fruits, medicinal herbs, and also fisheries, Sinai’s agro-food sector is one of the most promising sectors for promoting the role of SSEs in creating jobs for young people, raising incomes and restoring stability. Nevertheless, a quick look at the successive governments’ initiatives and policies towards the development of the agro-food sector in the region shows that these policies concentrated on the large sized enterprises and ignored SSEs. Although the existing literature suggests that in the presence of increasing returns to scale, this role of SSEs must be viewed critically with respect to competitiveness.

But, for those sectors and industrial tasks for which firms operate under rather constant returns to scale with respect to their number of employees, SSEs represent a particularly attractive candidate for future growth, and therefore, not surprisingly, have repeatedly been in the scope of economic development policies in numerous countries in the world. Besides the disadvantages imposed on SSEs because of being “small”, there are several other constraints that hinder the development of agro-food SSEs in Sinai including both financial (limited access to external funding) and non-financial constraints related to knowhow, marketing, accounting and other business aspects of management (Elkabbani and Kalhoefer, 2011).

Youth in the agro-food sector to restore stability

Against this background, the author of this article is leading a research project, which has recently been accepted for funding by the Science and Technology Development Fund in Egypt, that aims to identify the constraints hindering the growth of youth-led agro-food SSEs in Sinai and to exploit potential opportunities that could make them a means to enhance wealth and job creation and in turn contributing to restoring stability and security in the region.

Specifically, the project is designed to be implemented through two stages, namely; Research Stage and Application Stage, and each of the two stages has a set of sub-objectives in line with the overall objective of the project. The research stage will commence this full and it includes a comprehensive review of recent related theories and empirical studies followed by a series of questionnaires with different SSEs stakeholders to investigate the major barriers encountered and the needed interventions to create a supporting business climate for SSEs in Sinai to maximize their role in security and stability restoration.

Based on the survey results, the project will econometrically estimate empirical models to quantifying the determinants of youth’s decision and willingness to start an Agro-food SSE, perceived constraints, potential growth opportunities, and the impact of promoting SSEs on security and stability in the region. Based on the findings of this stage, the second Application Stage will follow. The key activities within this stage will consist of: implementing a set of specialized training programs targeting a sample of youth-led SSEs in Sinai; designing capacity building programs to strengthen selected services providers to better deliver their services to SSEs; and, configuring a long run a pro-SSEs strategy in Sinai.

More information about the project will be soon available on the project webpage: www.sse.egypt.info (presently under construction)

Things will only change if people in the room change' Final daily digest from GCARD2.