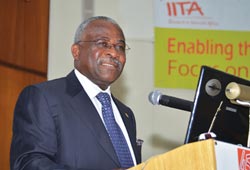 The rejuvenation conference organized by IITA as part of its resource mobilization strategy in 2012 has come and gone but the call for investments in young people by the President of the International Fund for Agricultural Development (IFAD), Dr Kanayo Nwanze that culminated into the formation of the IITA Youth program will not fade away.

Delivering a speech titled, Rejuvenation: Investing in agriculture for the future of Nigeria and its young people, IFAD president said that investing in young rural people is a simple but elegant solution to some of the worlds most pressing problems. It helps eliminate poverty and hunger, curtails migration to cities and abroad, and lays a solid foundation for national, regional, and global security, he said.

Dr Nwanze emphasized the need for young people to be the farmers and food processors of tomorrow, not just to feed themselves and their villages, but to grow the food to feed cities. When rural communities o?er young people a range of income generating opportunities, more will decide to stay in the villages and resist the call of often dead-end futures in the cities, abroad, or in extreme religious or political movements, he explained.

His speech which was clouded with great passion for the youth created the spark that stirred the formation of the IITA youth in agriculture project. As a follow up, IITA Director General, Dr Nteranya Sanginga held several meetings with the National Youths Service Corps members and challenged them to take action by getting involved in agriculture.

Today, this has paid o? as IITA now prides herself with agripreneursyoung people who are actively involved in agriculture and are saying, We will never go back; come what may.

Read the full text of the speech of Dr Kanayo Nwanze (IFAD President), 2012: Rejuvenation: Investing in agriculture for the future of Nigeria and its young people.