Working with young farmers to avoid the urban drift 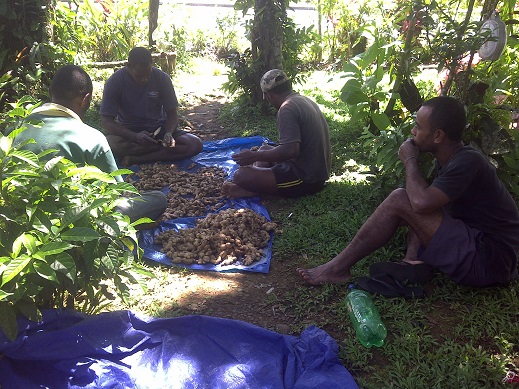 I was raised in a dairy farm on the rural outskirts in the Tailevu North Province, Fiji Island. After primary education I moved to Suva the City to further my studies and I have been residing in the City for over 20 years. I have worked in the armed forces, join the business executives career but deep inside I had a passion in farming, particularly in agro produce. I had been in farming on and off due to some reasons which I will discuss. In 2009 I started to invest in a farming project involving our church. It was planting watermelon on a 2 acre plot. I paid for all the costs but the land belonged to someone else. I lost everything when a dispute started on the ownership among the owners.

This has always been a problem to me is the access to land and ownership as this greatly affects farmers like me. I had a few other experiences but will not discuss them as I want to get right into my story. Now I have owned a land through a sub-leasing agreement which is more secure than the arrangement I had before. And I work with youths who are farmers to try to avoid the urban drift which is a major problem in Fiji.

The project Id like to highlight is a youth in agriculture network that comprises friends and relatives from Tailevu and Nausori. What we are trying to do is create a network or many small scale farms that, when united, form a large network or cooperative so were more competitive against the big boys who have more land and cashflow, to take advantage of export and other opportunities that arent accessible to small scale farmers.

Together we will have the economies of scale to better access export opportunities and so get better returns for our farm work. But also we know the future is going to take a lot of work especially around researching overseas market opportunities plus training young, subsistence farmers to change their thinking about agriculture, from it being a subsistence lifestyle to a profitable career that requires them to learn about new crops and farming techniques.

Our network is fairly new and started in 2007 but still is loosely formed. At the moment I have close to 2 acres of ginger seedlings planted which is projected to generate enough seeds to plant an area of 10 acres. This will be harvested soon around September. Members of the network are a mix of mature and young farmers  a ratio of about 80/20 where 80% is young people and 20% are mature. Its good to have the mature farmers as they give experience and advice, moral support and encouragement. Everybody in the network is already involved in doing their own farming  all are subsistent farmers who currently work on their farms.

In a certain villages they connect together in mini youth groups by village, and they share resources and help each other. Traditional subsistence farming needs a lot of labour, and there is not a lot of machinery. Especially ploughing takes a lot of time, to plough in the traditional way. Tools and other things are also being shared across these mini networks and I also gave them some fertilizers to share. So they go to each others farm to help with labour, and just to help one another so everyone can get their farms going. Then these mini groups all unite under the broader network.

Heres some of the issues I want to talk about in relation to small scale farming and what we want to achieve with our network:

My biggest request to government and agencies is for more training; more research about which crops offer the best overseas market potential and then training on how to grow and export these crops and assistance in start-ups.

Its hard for small scale farmers to compete against large farms and for us to look for export opportunities, on the small farmers in our growing cooperative have asked me to explore avenues like exporting ginger to NZ (New Zealand). So we did the research two years ago and found the local guys here buy ginger for 90c to $1.20 kilo but the ginger in NZ is $14 off season, so our farmers would probably get about $4 a kilo. Imagine!

So we are trying to break into that but there are a lot of restrictions and requirements and, for us as small scale farmers, we cant individually cover the costs of export facilities and thats why we are trying to build this network to get economies of scale to share the large overhead. Also it means well have a reliable base of supply as when we go into the export business we need to be consistent in terms of supply and quality. So on behalf of this network Im taking a lead role not only in managing but also monitoring according to international standards like the Organic Foundation as that is our bigger plan.

What is a young farmer?

"Working towards a new generation of Young Professionals in ARD" report